For better or worse, be it militarily, diplomatically, politically, economically, or culturally, Americans have had a profound role in shaping the wider world beyond them. Unsurprisingly, most non-Americans have passionate views about the nature of U.S. foreign policy. America has been a savior to some, a curse to others-and both have good reason to feel that way. And yet, such views are often also based on a caricature of American actions and intentions. For their part, Americans themselves have strong opinions about their role in the world and how it has evolved over time. Yet these views are shrouded as much in myth as they are grounded in fact. American Foreign Relations, then, suffers from being a subject of immense worldwide importance but almost complete misunderstanding; it provokes strong emotions and much debate in newspapers daily, but is accompanied by little comprehension.

This Very Short Introduction aims to offer analysis of key events, episodes, crises, and individuals in the making of American foreign relations. It will discuss events such as the Revolutionary War, the Louisiana Purchase, the War of 1812, manifest destiny, the Mexican War, the Civil War, industrialization, the beginnings of globalization, the Spanish-American War, imperialism, the annexation of the Philippines, informal imperialism and the Open Door policy, World War I, isolationism, World War II, the Cold War from its origins to its end (including the Korean and Vietnam Wars), the Iraq Wars, 9/11, and Afghanistan. Such topics will be situated within an analytical narrative that follows chronology generally, but not strictly or comprehensively. 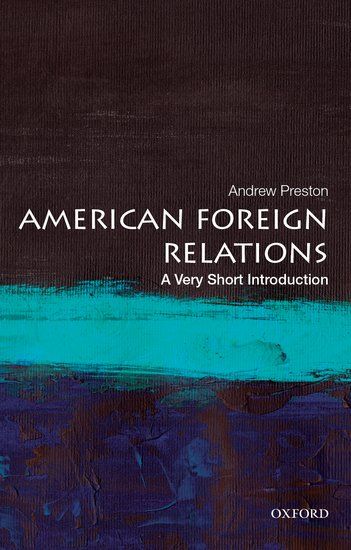 Look Inside
PKR 2,107
Out of stock!
Add to Wish List Add to Compare
Skip to the beginning of the images gallery
Additional Information
Reviews