‘We are Lovers of the Qalandar’

This book is about Pakistan’s most popular Sufi saint Lal Shahbaz Qalandar whose shrine in Sehwan Sharif is one of the most fascinating sanctuaries in the Muslim world. At the time of pilgrimage, this flourishing cult centre becomes a vibrant place of ecstatic religiosity marked by intense forms of devotion. The present ethnographic study is organized around three themes: piety, pilgrimage, and ritual. Thus, its focus is first on visual culture and ‘material religion’ as well as various aspects of religious aesthetics which highlight how sacred spaces are constructed and shaped. Secondly, it deals with the year-round pilgrimage, mainly investigating pilgrims from Punjab (including a unique life history of a female ‘Sufi lineage’ from Lahore), but also discussing remarkable ritual agents in the cult. The third theme is the spectacular trance dance known as dhamāl. On February 16, 2017, a suicide bomber executed a horrible massacre among the dancing devotees.

This work, which is the fruit of the author’s field-research between 2003 and 2015 in Sindh and Punjab, aims to contribute to a ‘Sufism observed’ which often seems to be neglected in mainly text-based Sufi studies. It is an academic companion to his earlier At the Shrine of the Red Sufi (OUP, 2011).

Dr Jürgen Wasim Frembgen   is Adjunct Professor emeritus at the Institute of Near and Middle Eastern Studies, Ludwig-Maximilians-University Munich; he retired as senior curator (Hauptkonservator) at the Museum Fünf Kontinente in Munich. He taught Cultural and Social Anthropology as well as Islamic Studies at different universities in Germany and Austria. He has written extensively on the cultures of the Eastern Muslim World between Iran and India, focusing primarily on Pakistan. Since 1981 he conducts ethnographic fieldwork in the Karakoram, Indus Kohistan, Punjab, and Sindh. In addition, he has been a visiting professor at the Quaid-i-Azam University in Islamabad (National Institute of Pakistan Studies), National College of Arts in Lahore, and Ohio State University in Columbus, USA.

Dr Frembgen has more than 180 English and German language publications to his credit. Many of his books and articles deal with Islam, Sufism, veneration of Muslim saints, arts and material culture, anthropology of the body, social outsiders, and facets of popular culture. He has also curated numerous exhibitions dealing with cultures of the Muslim world. In 2011, he was awarded the Tamgha-i-Imtiaz by the President of Pakistan for his distinguished merits in the field of science and literature. 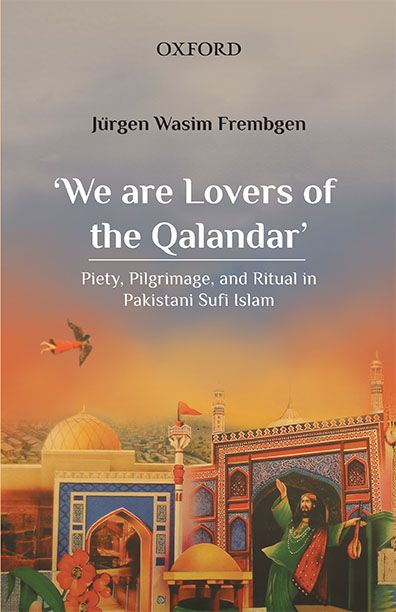 Look Inside
Skip to the beginning of the images gallery
PKR 1,010
In stock
Add to Wish List Add to Compare
Additional Information
Reviews
Filter