Neither a Hawk Nor a Dove

The book is the first comprehensive account by a Pakistani Foreign Minister who contributed in moving the peace process with India forward. This was hailed as the most promising dialogue between Pakistan and India since Independence. It provides a detailed analysis of the Kashmir issue and the complex Pakistan-US-Afghanistan-India quadrangular relationship. Kasuri believes that, whenever two statesmen are at the helm in India and Pakistan, for improvement of relations, they would have to revert to the framework formulated during his tenure as Foreign Minister.

The author writes frankly about his Indian counterparts, Pranab Mukherjee, Natwar Singh, and Yashwant Sinha, and also Manmohan Singh and Atal Bihari Vajpayee. Rare insights are provided into the workings of the Pakistan Army, the contributions of the Foreign Office, and the author's warm but complex relationship with former President Pervez Musharraf. He also covers Pakistan's relations with China, Saudi Arabia, Turkey, and Iran. On Bangladesh, his comments reflect nostalgia for old connections. The narrative is intricately balanced with the author providing anecdotes, both personal and political, alongside his observations on serious issues. On foreign policy matters, he deals objectively with those on the other side of the political divide.

Khurshid Mahmud Kasuri hails from an illustrious political family of Pakistan which played an important role in the subcontinent's Independence Movement. He was educated at the Universities of Punjab, Cambridge, and Oxford, and was called to the Bar from Gray's Inn, London.

Kasuri took part in various political movements for democracy in Pakistan including the PNA (Pakistan National Alliance), MRD (Movement for the Restoration of Democracy), and the PDA (Pakistan Democratic Alliance). Like his father, uncle, and grandfather who were active in the Independence Movement and for which they underwent imprisonment, Khurshid Kasuri was also incarcerated for his political activities. He strongly believes in Jinnah's vision of a pluralistic, progressive, and inclusive Pakistan. He tendered his resignation from the National Assembly when Prime Minister Nawaz Sharif wanted to push through the 15th Amendment which Kasuri regarded as reactionary and contrary to Jinnah's vision.

Kasuri served as Pakistan's Foreign Minister from 2002-07. He assumed office in the immediate aftermath of 9/11 when Pakistan faced challenges with the US, India, and Afghanistan.

Khurshid Kasuri is currently Chairman of the Regional Peace Institute, an Islamabad based think tank. He is Pakistan Tehreek-e-Insaf's (PTI) Senior Advisor on Political and International Affairs, Chairman of its Task Force on Kashmir, and a member of the party's Core Committee. 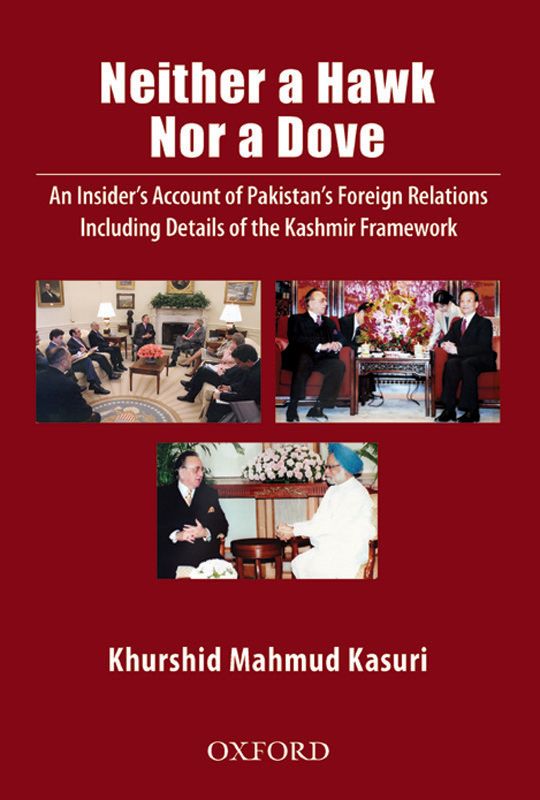 Look Inside
Skip to the beginning of the images gallery
PKR 950
Out of stock!
Add to Wish List Add to Compare
Additional Information
Reviews
Notify me when this product is in stock
Filter