The Political Odyssey of a Pakistani Woman
Syeda Abida Hussain
The book is a political biography of the author—in which she has intertwined the impacts that key political events of the country have had on her personal life—and on the destiny of the nation. It is also an anecdotal account of missed opportunities. The narrative begins with a chapter on the author’s privileged childhood, her entry into politics, and the hurdles and struggles that she faced along the way as a woman politician in the male-dominated society of rural Punjab. She provides details of the deterioration and erosion of the country’s institutions. A unique insight has been offered on the rise of extremism. Pakistan’s close embroilment in Afghanistan has been covered, beginning from the late seventies right up to the first decade of the twenty-first century. The book goes on to discuss the high developmental potential of Pakistan, when it was carved out of India as a separate country at the time of Partition in 1947; the unremitting diminishing progressive curve since the country’s inception; and the consequent rise of militant and extremist groups emerging out of religiosity rather than religion onto its political landscape. The author attempts to provide insights into the reasons: poverty and inequity of our societal construct, conspiracies spawned by individuals and interests, both at the national as well as international levels, who merely sought to serve what were often their perceived short-term aims and objectives. As an individual and as a politician, the author often found herself caught up, quite unwittingly, in the vortex of this issue and ensuing events, with her life often under threat, and her career in politics interrupted, even prematurely curtailed. Light has also been shed on the regressive elements in Pakistan. Reliant on personal notes and diaries and other source material, Syeda Abida Hussain in this book, has recorded events that have resonated with her, and in which she had some part to play. The text has been enhanced by corresponding photographs, both, from her personal and public life.
Author Description

Syeda Abida Hussain is a politician, horse and cattle breeder, agriculturist, and diplomat. She belongs to Jhang, situated in the Punjab province of Pakistan. Abida Hussain has the distinction of being the first woman to chair the District Council of Jhang, and the first woman to be popularly elected as Member of the National Assembly of Pakistan. She served as Pakistan’s Ambassador to the United States from 1991 to 1993. She has also served as Minister for Education, Science and Technology (1996), Minister for Food and Agriculture (1997), Minister for Population Welfare, and Minister for Environment and Urban Affairs (1999). Abida Hussain is an active proponent of ‘Education for All’, gender equality, and sectarian harmony. 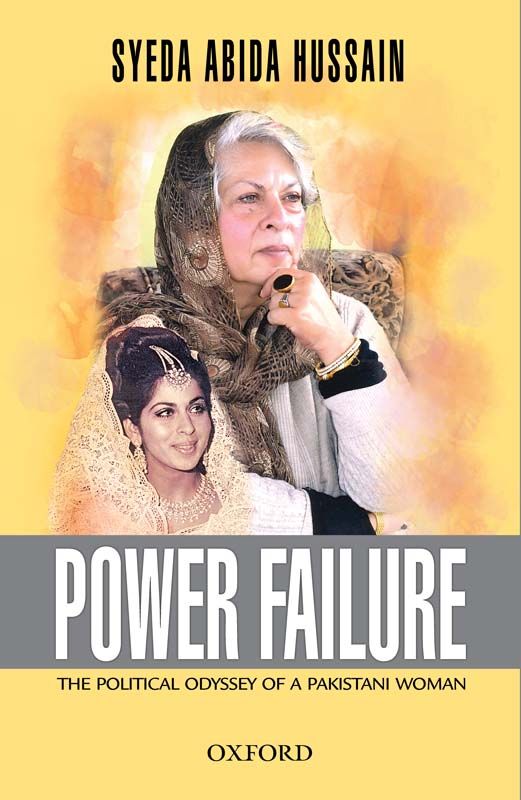 Look Inside
PKR 795
Out of stock!
Add to Wish List Add to Compare
Skip to the beginning of the images gallery
Additional Information
Reviews
.
Notify me when this product is in stock
Filter