Liaquat Ali Khan (1895–1951) was among the founding fathers of Pakistan. His contribution to the creation and consolidation of Pakistan has been immense. Yet the fact that no biography of this first Prime Minister of Pakistan and the last Honorary Secretary of the Muslim League has ever been written in English shows how far his role has been neglected. This book has the distinction of being the first biography of this historic figure. Based on primary and unpublished material including the Jinnah-Liaquat Correspondence, The All-India Muslim League Papers, and The Shamsul Hasan Collection, this book contains many interesting disclosures, notably about the Desai–Liaquat talks, Liaquat’s hostility to the British War efforts, and the economic imperatives of the 1947 ‘Poor Man’s Budget’. This will be essential reading for all those who are interested in the recorded history of Pakistan.

An excellent biography in every way, lucid comprehensive, accurate, the best introduction to Quaid-i-Azam’s foremost lieutenant of the Muslim League and Pakistan’s first Prime Minister.

I have read with interest and profit Dr Kazimi’s book on the life of Liaquat Ali Khan and congratulate him on a study that adds considerably to our understanding of Pakistan’s prehistory. I like his objective approach.

– Richard Symonds
Author of In the Margins of Independence (OUP, 2001)

This is both an important and original work. It has been very well researched both in regard to original and secondary sources. The thesis constitutes an important addition to scholarship on the life of Liaquat Ali Khan as well as the Pakistan Movement.

Dr Muhammad Reza Kazimi (b. Bombay, 1945) is Editor, Historicus: Quarterly Journal of the Pakistan Historical Society. He has taught Islamic History and Pakistan Studies since 1970 and continues to supervise doctoral research at the University of Karachi. His publications include Liaquat Ali Khan: His Life and Work (OUP, 2003); A Concise History of Pakistan (OUP, 2009), Pakistan Studies (OUP, 2006), The Blood of Husayn (Peace Publications, 2011), and M.A. Jinnah: The Outside View (Peace Publications, 2020). His edited works include Jinnah-Liaquat Correspondence (PSC, 2003) and M.A. Jinnah Views & Reviews (OUP, 2005). He is also a literary critic with publications in Urdu. 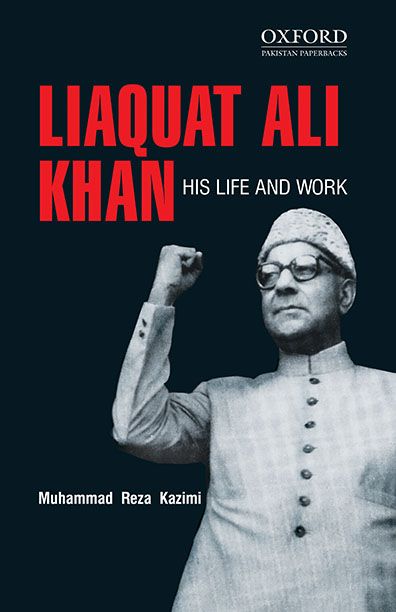 Look Inside
PKR 1,030
In stock
Add to Wish List Add to Compare
Skip to the beginning of the images gallery
Additional Information
Reviews
Filter