Treaty of Nownahar, Fraud, and British Sindh
Introduced and Edited by Matthew A. Cook
Willoughby’s Minute describes events that surround the 1842 Treaty of Nownahar. Its focus is on how the indigenous sovereign Mir Ali Morad committed a fraud when he altered the treaty. Authored by John Pollard Willoughby, a career East India Company civil servant and Bombay Council Board member, the Minute provides an alternative genealogy to contextualize British debates about Sindh’s annexation. This genealogy does not focus on Britain’s aggressive anti-Russian imperial policy in Afghanistan (i.e., the Great Game). Instead, it demonstrates how a local treaty—that did not involve the British directly—contextualizes Sindh’s annexation and the institutional relationship between civil and military authority within the East India Company.
Author Description
Matthew A. Cook is Associate Professor at the Department of History and the Department of Language and Literature at the North Carolina Central University, USA. His past teaching appointments include: North Carolina State University, New York University (NYU), Columbia University, Hofstra University, and Duke University. His research focus is on Sindh, colonialism in South Asia, and the methodological conjunction of anthropology and history. He is editor and co-editor of three books by Oxford University Press, Observing Sindh: Selected Reports by Edward Paterson Del Hoste (2008); Interpreting the Sindhi World: Essays on Society and History (2010); and his latest being this book, Willoughby’s Minute: Treaty of Nownahar, Fraud, and British Sindh (2013). Cook recently completed a book manuscript titled, Annexation and the Unhappy Valley: The Colonization of Sindh by the East India Company. He is also the author of book chapters, journal articles, and reviews published by Oxford University Press, Edwin Mellen Press, Eastern Anthropologist, Sagar, Columbia Journal of Historiography, Columbia Historical Review, Educational Practice and Theory, Curriculum and Teaching, South Asian Review, Pacific Affairs and Itinerario.
Skip to the end of the images gallery 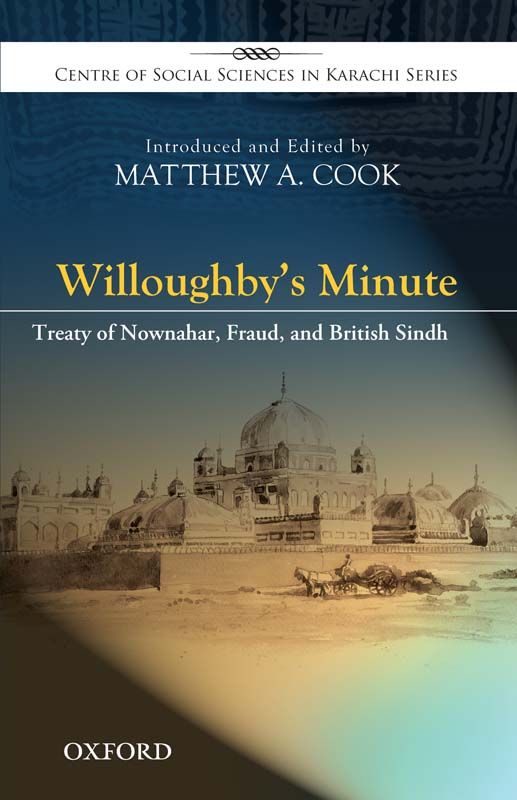