Pakistan, its Army, and the Wars Within Second Edition
Shuja Nawaz

Based on 30 years of research and analysis, this definitive book is a profound, multi-layered, and historical analysis of the nature and role of the Pakistan Army in the country’s polity as well as its turbulent relationship with the United States. Shuja Nawaz examines the army and Pakistan in times of both peace and war. Using several hitherto unpublished materials from the archives of the United States, the United Kingdom, and the General Headquarters of the Pakistan Army, as well as interviews with key military and political figures in Pakistan and the United States, he sheds light not only on the Pakistan Army and its US connections but also on Pakistan as a key Muslim country in one of the world’s toughest neighbourhoods. In doing so, he lays bare key facts about Pakistan’s numerous wars with India and its many rounds of political musical chairs, as well as the Kargil conflict of 1999. He then draws lessons from this history that may help Pakistan end its wars within and create a stable political entity.

This second edition comprises an updated preface which summarizes the period of tumult and the significant transformation that both Pakistan and its army have undergone in the last decade.

Shuja Nawaz, a native of Pakistan, is currently a distinguished fellow at the Atlantic Council's South Asia Center in Washington DC. He was the Center's founding director from 2009-2014.

As a political and strategic analyst, Nawaz writes for leading newspapers and websites, and speaks on current topics before civic groups, at think tanks, and on radio and television worldwide. He has worked with RAND, the United States Institute of Peace, the Center for Strategic and International Studies, and other leading think tanks on projects dealing with Pakistan and the Middle East. He has also advised or briefed senior government and military officials and parliamentarians in the United States, Europe, and Pakistan.

Shuja Nawaz was educated at Gordon College, Rawalpindi, where he obtained a BA in economics and English literature and the Graduate School of Journalism of Columbia University in New York. He was a newscaster and news and current affairs producer for Pakistan Television from 1967 to 1972 and covered the western front of the 1971 war between Pakistan and India. He has worked for The New York Times, the World Health Organization (WHO), and has headed three separate divisions at the International Monetary Fund (IMF). He was also a director at the International Atomic Energy Agency (IAEA) in Vienna from 1999 to 2001, while on leave from the IMF. Nawaz was the managing editor and then editor of Finance & Development, the multilingual quarterly of the IMF and the World Bank. He served on the editorial advisory board of the World Bank Research Observer. He taught a course on the New South Asia at the University of Mary Washington in Fredericksburg, VA.

Shuja Nawaz is author of Crossed Swords: Pakistan, its Army, and the Wars Within (Oxford University Press 2008). He is also the principal author of FATA: A Most Dangerous Place (CSIS, Washington DC January 2009), Pakistan in the Danger Zone: A Tenuous US-Pakistan Relationship (Atlantic Council 2010), Learning by Doing: The Pakistan Army's Experience with Counterinsurgency (Atlantic Council 2011), and with Mohan Guruswamy, India-Pakistan: The Opportunity Cost of Conflict (Atlantic Council 2014). 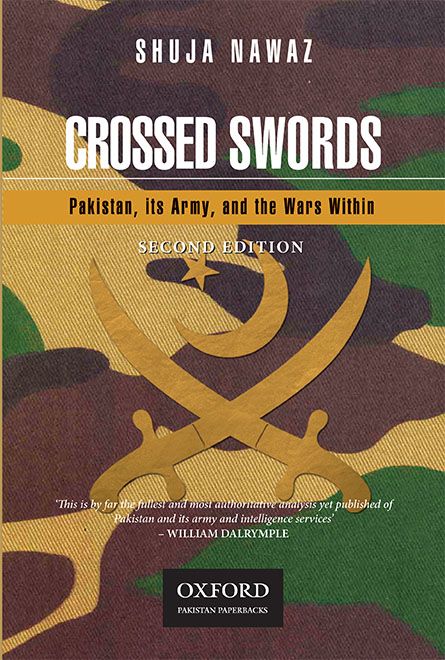 Look Inside
PKR 2,245
In stock
Add to Wish List Add to Compare
Skip to the beginning of the images gallery
Additional Information
Reviews
Filter