Renderings in English Verse with Comparative Urdu Text
Translated by V. G. Kiernan
Allama Muhammad Iqbal was acknowledged during his lifetime as the most important poet of Muslim India in the twentieth century, both for the quality of his verse and for the influence exercised by his ideas. Since his death in 1938, his fame has continued to grow and has reached the West through a number of English studies and translations. Most of the latter have been about his philosophical poetry in Persian. This volume contains a rendering in English of over a hundred poems chosen from the four collections of Iqbal’s poetry written in Urdu, which include religious, lyrical, satirical and other themes. The English versions are accompanied by the original text.
Author Description

V. G. Kiernan (1913–2009) was a pupil of the Manchester Grammar School, and then of Trinity College, Cambridge. He then went on to undertake research work in modern diplomatic history, and won a College Fellowship. He was in India for eight years before the Partition, involved in radio broadcasting during the war, and in teaching at the Aitchison College in Lahore. During his time there he got to know Faiz Ahmed Faiz and other Urdu writers, and began his verse translations of Iqbal, who had died recently in Lahore, and of Faiz. In later years he was given a Personal Chair in Modern History at the University of Edinburgh, where he wrote a number of books and essays on Asian and European history, and on English Literature. 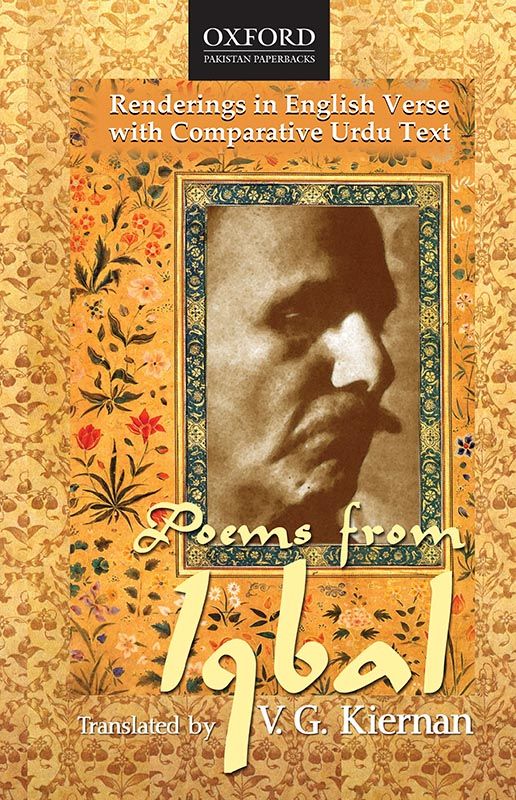 Skip to the beginning of the images gallery
PKR 695
Out of stock!
Add to Wish List Add to Compare
Additional Information
Filter