Between Dreams and Realities

In the second edition of this book, the author has added new material to an already illuminating record of the milestones and turning points in Pakistan’s political history. This book attempts to demonstrate that only a genuine democratic dispensation can ensure its survival as a viable federation. Sartaj Aziz argues that the vitality of a nation comes primarily from the value system, cultural heritage, and social energy of its people.

As Finance Minister under Nawaz Sharif, he was the main architect of many of the far-reaching reforms introduced in the early 1990s and describes the changing processes of public policy in Pakistan. As Foreign Minister during the Kargil crisis of 1999, he presents an authentic and insightful account of that unfortunate phase in Pakistan’s history.

Sartaj Aziz has also covered Pakistan’s emergence from military rule during the two PPP governments of the Zardari Presidency.  He describes Nawaz Sharif’s third term as an elected prime minister, his later disqualification, and the subsequent in-house change. In the last chapter, ‘Imran Khan as Prime Minister’, the author examines the performance of Imran Khan since the 2018 elections.

As you swipe through this book, you will not only recognize Sartaj Aziz's role as a repository of knowledge, but also how much understanding he has about the system and how deeply he appreciates the implications of decisions made. He describes them and their actual fallouts so eloquently. For me, this is a reference book. Anytime I need to write up something or need to understand any issue, I refer to Between Dreams and Realities.

I wholeheartedly agree with Sartaj Aziz when he writes at the end of this book 'the dream of Pakistan should never be allowed to die'.

Former Governor of Punjab and Defence Minister of Pakistan

This book is written with a purpose: to convey to the coming generations that Pakistan can survive only through a genuine democratic framework.

‘Lahore Journal of Policy Studies’, of Lahore School of Economics

Sartaj Aziz is a development economist and an alumnus of Harvard University. After a distinguished career as a civil servant (1952–71), he began his international career as Director, Commodities and Trade Division, Food and Agriculture Organization (FAO) in Rome. In 1974, he served as Deputy Secretary General of the World Food Conference and was one of the architects of the global food security system, and helped establish the International Fund for Agricultural Development (IFAD). After serving as Deputy Executive Director of the World Food Council and Assistant President, Policy and Planning, IFAD (1978–84), Sartaj Aziz returned to Pakistan to serve as Minister of State for Food and Agriculture for four years. He served twice as Finance Minister (August 1990–June 1993; February 1997–August 1998) and as Foreign Minister (August 1998–October 1999). Later he was elected to serve as member of the Pakistan Senate (1985–99).

He was the first Vice Chancellor of the Beaconhouse National University, Lahore from 2004 to 2013. After the 2013 General Elections, he became Advisor to the Prime Minister on National Security and Foreign Affairs (2013–2017) and later Deputy Chairperson, Planning Commission (August 2017–May 2018).

His publications include: Industrial Location Policy (1969), Hunger, Politics and Markets: The Real Issues in the Food Crisis (1976), Rural Development, Learning from China (1978), Agriculture Policies for the 90s (1990), Privatization in Pakistan (1996), Hunger, Poverty, and Development: Life and Work of Sartaj Aziz (2000), and Report of the Committee on FATA (2016). 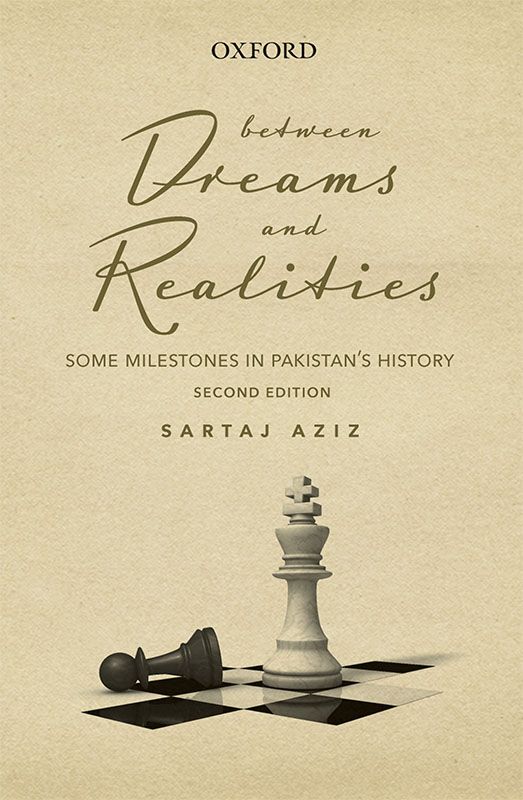 Look Inside
PKR 2,295
Out of stock!
Add to Wish List Add to Compare
Skip to the beginning of the images gallery
Additional Information
Reviews