Critical Outsider and Witness in a Turbulent Age
Stuart Schaar

Eqbal Ahmad, committed democrat and progressive Muslim, saw the future without a crystal ball. He read and travelled widely, met great minds involved in international affairs, novelists, poets, and journalists. A former anti-Vietnam War activist in the USA he was indicted in 1971 with others for conspiracy to kidnap National Security Advisor Henry Kissinger. After a jury threw the case out, he became a major critic of US foreign policy. As a critical outsider, he argued that the Cold War did not define the post-1945 world. Rather, Africans, Asians, and Latin Americans caught in proxy wars for the great powers faced constant upheaval and subversion. The defining forces were revolution and counterinsurgency.

Ahmad taught in Massachusetts and became a columnist, with a weekly readership of some four million people. His friends in the USA included Edward Said, Noam Chomsky, Richard Falk, and Howard Zinn. In Pakistan, where he returned in the latter part of his life, he became a cross-border peacemaker between India and Pakistan as well as an anti-nuclear activist.

Stuart Schaar’s book highlights the many ways that Ahmad’s ideas and predictions carry weight and deserve our attention. His analysis of terrorism and insurgency still appears relevant and timely. His legacy as a peacemaker and his stress on non-violence and mass mobilization also serve as models for contemporary activists.

‘Ahmad was an inspiring figure, in his work and his life. There could hardly be a better model to try to follow, as best we can.’

Noam Chomsky, ‘Foreward’, to The Selected Writings of Eqbal Ahmad

‘Perhaps the shrewdest and most original anti-imperialist analyst of Asia and Africa….’ ‘He brought wisdom and integrity to the cause of oppressed peoples.’

‘I think he was ahead of almost everyone in seeing brilliantly the commonalities between the various kinds of fundamentalism on the rise in the world then: Hindu, Muslim, Jewish (West Bank settlers), and the Christian/market fundamentalism of the American right. He saw any kind of fundamentalism as dangerous, and repeatedly, during the 1980s, talking about the US aid going to the Taliban, and kept saying, “You Americans don't understand what you’re doing there. This will come back to haunt you.”’

‘Knowing him has been an education. He is…the finest, most astute and brilliant analyst of contemporary politics from a non-European and non-Western point of view that I have ever encountered. Deeply learned and humane, he is a man of great, genuine learning... he commands history, politics, society, culture and everyday life, and as a consequence his analyses are regularly enlivened by the insight and generosity that eludes most other people in his field….He is also…a man of reason and dispassionate fairness, never more then when his own sympathies are engaged…no one has the command and learning that he has…. I cannot think of anyone more distinguished as man and as scholar than Dr Ahmad.

‘Eqbal’s traumas—his father’s murder, his forced exile—he built into extraordinary bridges he many times crossed—to the humiliation of the Palestinians, to the anguish of colonized Algerians, to the devastated residents of Beirut in the early 1980s after Israeli bombing, to struggling American blacks, to frightened immigrants, and to multicultural peoples—in distress or not in distress—everywhere. Eqbal lived a big life. He had a wide compass of empathy, and many deep friendships, among them, one with my husband Adam and me. We were honored to know and love him. He was a great man.’

Author Description
Stuart Schaar, Professor Emeritus, Brooklyn College of the City University of New York, retired from forty years of teaching there in 2007. He lived first in Tunisia and then in Morocco, where he now resides and teaches a course on the Arab Spring. He had earlier spent two years in Morocco researching his PhD thesis, ‘Conflict and Change in 19th Century Morocco’. He met Eqbal Ahmad at Princeton in 1958 and they became close friends. He visited Pakistan and India with Eqbal in 1980 and returned to Pakistan in 2004. Over the years, he has also visited and conducted research throughout North Africa on politics and history, and has visited Egypt, Jordan, Lebanon, Israel, the Palestinian West Bank and Gaza, and northern India. He is the co-editor/author with Marvin E. Gettleman of The Middle East and Islamic World Reader. He has also co-edited with Mohsine El Ahmadi The Birth of the Arab Citizen and the Changing Middle East.
Skip to the end of the images gallery 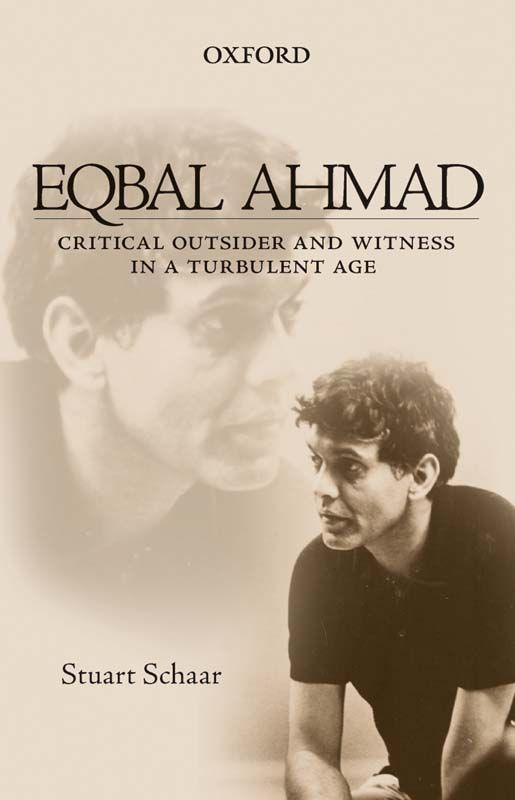 Look Inside
Skip to the beginning of the images gallery
PKR 925
Out of stock!
Add to Wish List Add to Compare
Additional Information
Reviews
Notify me when this product is in stock
Filter